Poetry on the GO

Not too long ago, as I sat aboard a GO train headed for Union Station in Toronto, I noticed a familiar gesture. The woman who sat across from me stared out the window. Her reflection fused with oncoming trees, cars, and buildings. I faced the direction of the train; she did not.

It came to me then, as it had so many times before, that I could use even a seemingly mundane thing as a springboard for a story.
Plus, I take the train so often, I'm bound to fimd gems - if I take the time to notice.

That morning, the words came in poetry. I knew the title immediately. That I would call the collection "Poetry on the GO" came later.

And, while I do not yet have that collection, per se - actually, only one poem so far - I know the others will come. Here now is the first from the...collection.

Tears On A Train

She sat looking out the window
Of the LSW Train
Something must've been boiling
Because, tears came.

She searched her back for tissue
None was to be found
So, instead of looking out
She started looking down.

Labels: GO Train, poems, Poetry on the GO, Tears On A Train, writing

My 6yo niece, Kiki spent Valentine's Day Eve with me. Yes. If it wasn't a thing before, it is now. She was off from school because of PA day. I was off from work because I'm an adult and can do whatever I want. Umm. No. Not really. I took time off.

And what a joyous day it was! The child is a treat. I was treated to gems from the back seat of the car. And at the mall. And at home. They went a little something like these...

She: You know why I like Valentime's Day?
Me: ValentiNe's.
She: ValentiNe's. I have a problem with that word.
Me: Apparently. Go on.
She: On ValentiNe's Day, there's so much love. And gifts.
Me: Yeah, for someone special.
She: Well, for anybody, as long as you can give.

She: I was wondering, do you have a Valentine's Day gift for me?
Me: Umm, yes. We`re going home to prepare Ackee & Saltfish - and Festival!
She: Yes! This is the best Valentine's Day ever!

We stopped at the mall because I needed to. Really. Before attending to the purpose for the visit, however, I had to make a small detour into Shoppers. As it turned out, they had gone all...Valentiney. There were stuffed toys, chocolate, and stuffed toys with chocolate...everywhere! Kiki was like, well, she was a kid in a candy store. As we walked down one aisle, (alas, I had given in to her plea for "just one Valentine's Day present"), I heard her behind me:

We went from one aisle to the another comparing toys - and prices. At some point, she started repeating after me, "These prices are ridiculous!" I decided to tone it down.

We finally narrowed it down to three little stuffed animals. Little. We had no idea what the price was for one of them. The cashier was gonna have to help us decide. Or so I thought. As soon as the cashier let us know that two of them were Beanie Babies, my niece was beside herself with excitement!

She: Okay. Okay. You choose.
Me: Which one do you want?
She: Just choose for me, please!

I related to her dilemma. Faced with the hard choice, she'd be there all day. So, I chose the purple and white giraffe - don't ask - and earned the title: Best Aunty for the Day. Booyah! (Smart girl. She's very careful with her superlatives re her aunts. She has several. Aunts - and superlatives.)

The icing on the cake at the mall, though, came after I'd completed the business I'd really stopped in for. Now, a new store is coming soon and it'll be on the ground floor. As part of the promotion, there's a ceiling-to-floor picture of a model's face. Standing next to it, Kiki looked rather small. I guess she was fascinated by that. She asked me to take a pic. I did. We made our way around the corner and there it was again - the model's face in larger-than-life depiction.

[I turned to see what the excitement was about.]
Me: Eeeww!

I suspended my mild disgust long enough to take a pic. After all, it was the funniest thing I'd seen in a long time! 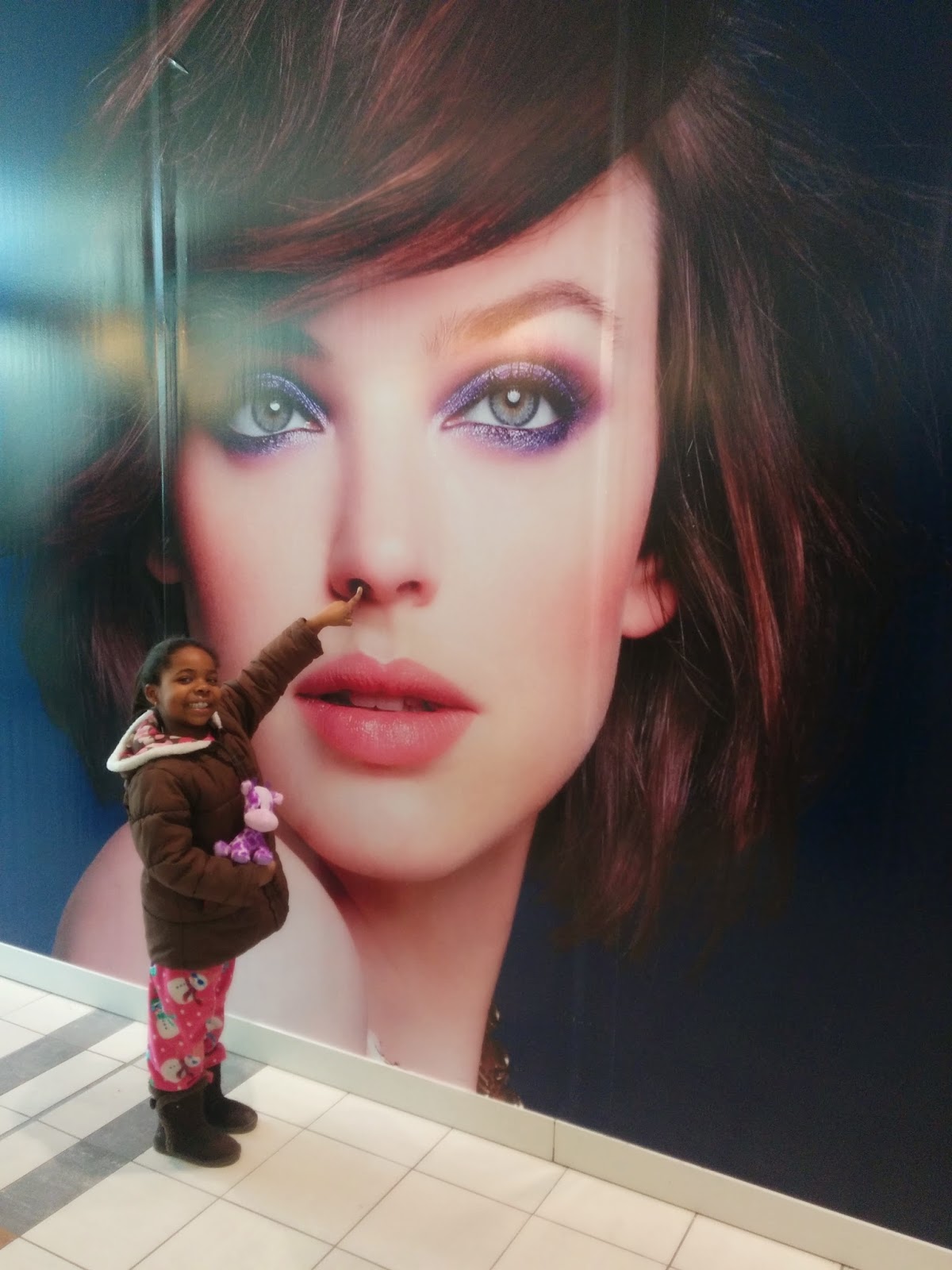 We got home and ate and watched Ever After High and did some story-telling - with the toys as characters - voice-overs and all. Before her afternoon nap, I wanted to capture the day with both of us, so I told her I wanted a selfie. (We were lounging on the couch, rocking our "bed hair".) I showed her the first shot, expressing my dismay at the state of my hair.

She: It's not important what our hair looks like. What is important is that we're spending time together.
Me: Yeah. You're right.

She was right. So, I have a pic with Kiki where we're both rocking our "bed hair".

In a rather unceremonious way last evening, I submitted the manuscript for my anthology of poems to a publisher for review. It wasn't that it was anti-climactic. Rather, it was that the time had come and it was the thing to do.

I've talked a bit about the writing journey, and the recent steps toward the publication of my poems, in a previous post entitled...wait for it...wait for it...Yep! You guessed it. "Fourteen To Fortyish: The Formative Years" An Intro - of sorts. Further to that, I did more work on that body of work. I heeded the points and perspective Daniel was so brutal, yet so gracious, to share. Yes, I cut and clarified and snipped and smoothed accordingly. There were only a few instances where I parted ways with a suggested change in wording or phrasing. I was happy with them as I'd written them.

After working on the anthology for a while longer, I realized there was nothing truly stopping me from making that next step. Nothing, that is, except for the (expected?) angst of letting my poems go; setting them free into the world, and wondering how they would fare. After all, I'd been writing and compiling for decades. Still, I couldn't coddle them forever. I could keep adding a comma here and removing another there; add a space here; break a stanza there, and so on. But, it began to feel like stalling.

So, at some point, I decided February was the month to get some writing projects off my plate. I wrote a piece - well, edited and tailored a blog piece - for submission to a newspaper. I got that done last Monday. We'll see how it fares. I then turned my thoughts to the poems. A day or two later, I revisited the web site of the publisher I'd been in touch with - making inquiries and such. A day or so after that, I got an email touching base, wondering how my manuscript was going. Well, clearly, it was time. It is said writers don't need time; they need a deadline. So, I set the deadline - yesterday - and promised I'd submit it on February 7, 2015.

I went over each of them one last time. I still made a few changes to the three or four of them I'd highlighted to revisit. By the time I was through, I was happy with those, too. I am yet to write the acknowledgements. But, I'd been assured that could come later. And, speaking of acknowledgements, even as I added the finishing touches, I got a little cheering on from sis, Durie. You know, I need to make a list. Really don't want to miss the folks I should acknowledge. I'm also working on a cover that properly conveys the coming of age/journey of life/character arc...you catch my drift. In the meantime, I'll be reaching out to three or or four people who've written some heartwarming things about my poems. I hope to get their permission to quote them on the back cover.

Of a truth, there's also been that feeling of wanting to make way for something new. Yes, life spared, there will be more poems. I'm thinking they will be borne of requited love. Think happy thoughts. Think happy thoughts. The last section of this anthology speaks to hope. I shared one of the poems from that section in the previous post. I think the next poetry book will continue in the vein where this one left off. Hope is a good thing.

And now, we wait.