I was on the GO train the other day when a young woman embarked. She sat diaginally across from me in one of those double row seats. She appeared to be a student. Beside her, and straight across from me, sat another young woman - older, professional, complete in business suit and all. This was in the still chilly March weather.

To my left, and in the corner, sat a gentleman. He might've been in his late twenties, early thirties. Bear with me. I'm going somewhere with this.

Shortly after we left Union station, the student and the gentleman struck up a quiet conversation. After all, we were seated in the Quiet Zone. It may have been about...ah! Yes. It was about his watch. There was something she found remarkable about it.

Shortly after that, she took her drawing pad and a pencil from her bag. And, she started drawing. I made a polite glance and realized she was drawing a caricature of the man. I cast a furtive glance in his general direction to catch any expression of surprise I could. Nada. Either he was blissfully unaware that his "likeness" was being reproduced, or, he was aware and didn't mind. Or, he did mind  but chose not to be confrontational. Or some like thought.

She continued drawing, rather fast, I might add. She really got that talent down pat. While she did, the young woman next to her reached for her smartphone, then held it up at an angle to direct the lens toward the notepad. Yes. She was unabashedly taking a few photos of the artwork in progress.

By this time, the guy being drawn was clearly in the know about the representation of his image. I'd caught him looking at the notepad. He'd said nothing. I wouldn't go as far as to say he seemed flattered. That'd be a romantic unfounded notion. But, at the least, he did appear a bit amused and totally, as in totally, not bothered.

The younger girl continued her drawing. She too didn't seem to care at all that her work was being photographed by a total stranger - in such proximity!

Of course, when she wrapped that up and started in a new page and glanced a couple of times in my direction, I had to ask, "Are you drawing me now?"
"No," she answered with a smile.
The young woman and the man smiled, too. But, I needed to add, and so I did, "Okay, 'cause I'd have to, y'know, change seats," I said with a feint smile of the pursed "so-there's-that" lips kind. They did a mix of polite smile and chuckle.

At the next stop, our little community disbanded and life went on.

So, we are here. Total strangers all up in total strangers' faces like that. Someone who's performing pretty much expects the smartphones to come out. But, here was a guy, going about his business and voíla! There'd been no request for permission to draw him. There'd been no request for permission to take a photo of the drawing. The characters in this true story simply did as they pleased, as though based on the assumption that the man was worth drawing, or the drawing was worth snapping, consent was implied.

A few weeks after that episode, I spotted a tweet re an article about a young woman who'd had a kind of altered rendition of her Instagram pic put on show. The blown-up photo was said to be sold for about $90,000. Just. Like. That.

I've said before that, these days, once you leave your house - or anyone else's house for that matter - be prepared to be caught up in someone else's video or photo. (Alas, you may be photo bombing and not know it.) It's as though your decision to be out and about in public means your consent to be caught on camera is implied.

Well, you have to leave the house at some point. Correct? Whatyagonnado. Take comfort in the fact that most people couldn't care less about the people who happen to be caught in the background of their pics. Really.

You can leave the house now.

The Sound and the Fury: Fireworks!!!


For years, sis (@MizDurie), has been inviting me to behold the spectacle that is the Toronto fireworks show at Ashbridge's Bay. Years. This year she tried again. This year, I agreed. I decided to see what the fuss was about. 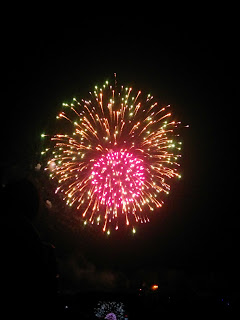 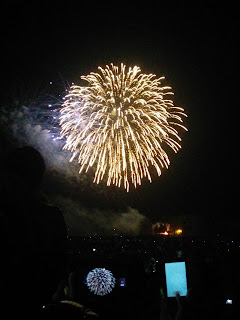 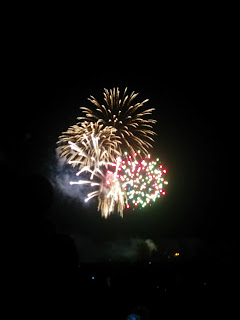 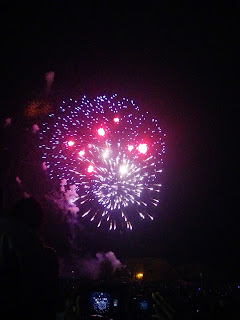 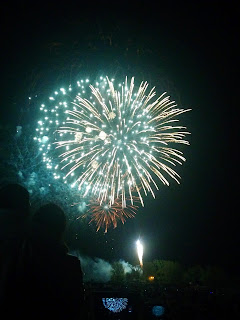 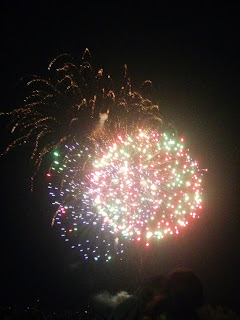 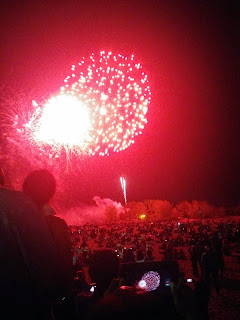 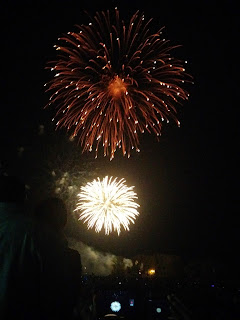 Happy Dance In My Head

On the last day of April - which was a fantastic month, by the way - I was travelling home on the GO Train. I was seated in one of the upper level cars, in one of those rows that face another. On rush hour trains, the upper cars are designated Quiet Zone areas - short and quiet conversations are okay; passengers may plug in to their personal devices, as long as they don't disturb others, etc.

It was a little after 4:30...okay, it was 4:36. I had checked, just as the thought crossed my mind to ask a favour of the woman seated across from me. She had been reading The Cruellest Month - a rather thick novel. I figured if she is a reader, then she could be relied upon to give valuable feedback on a totally new piece. Before I gave myself a chance to talk myself out of it (that sounds funny), I spoke up. I had read in Blake Snyder's Save The Cat that it's a good idea to ask someone at, say, a coffee shop, to look at you work or draft or idea. I totally get that. I imagine you'd likely get great feedback from a total stranger with no hangups about hurting the feelings of someone they'll probably never lay eyes on again. And, if they do, they'll probably change coffee shops. Or, you could change coffee shops. Okay! It's not about coffee shops.

So, as I was saying, before I interrupted myself, I spoke up.

Me: Excuse me. I've never done this before. I'm writing an introduction to my anthology of poems. Would you mind reading it and letting me know what you think?
She: Yes, of course.
I handed her my phone. She bookmarked her page, then looked me in the eye, "I'd be happy to read it."
Me: Thank you!
I was positively beaming! I did my happy dance in my head! Heh heh.
When she was finished, she leaned toward me and I followed cue and leaned toward her. We were, after all, in the Quiet Zone.
She: It's very real. It's very personal, and it's moving. It should go well with the poems as that's what they're about. It needs a bit of editing, but it's really good.
Me: Thanks so much. Could you tell me where needs editing?
She: That part where you talk about the relationship? His pillow? Is it a real person or someone you're imagining? The reader needs to be clear on that. Hopefully, that gives you enough to go on?
Me: Yes! Thank you!

I'm glad I'd plucked up the courage to do it. I got good feedback. She was right, of course. I knew the context I had had in  mind when I wrote that section, but the reader would need more information to make sense of it.

Can I tell you? That was a wonderful way to end April 2015! I had won the poetry competition at the Lit Café, and @CBCBooks had held a lil #CBCRhymes competition on Twitter one day - and I was one of two (or three) winners! I received a few poetry books as my prize. They came just in time, too. A few days earlier, my publisher had asked me to send the write-ups - acknowledgements, author bio, and so on - for my upcoming poetry book. I had decided on a cover, too. When I got those books in the mail, the first thing I did was pay attention to the covers; how the titles were written; whether the font sizes were too big, etc. And, yes, I will be reading them. :-)

Fourteen to Fortyish: The Formative Years is now in the production process.