She had a great day. I stopped by after work, and she told me so. :-) She said she was smiling a lot when her classmates sang her Happy Birthday. I can only imagine how she was beaming.

The story I want to share happened some time after she turned Three. She had just got an Elmo toy and he was all the rage. Elmo this; Elmo that. As a matter of fact, during the Elmo years, occasionally, one of her aunts would be dubbed her "best friend, ever!" Then, without warning, we'd learn that Elmo had regained his spot as her BFF. Crestfallen much? Nah. We lived and we learned.

On this particular evening, I stopped by to pay her a visit. Maybe I was visiting with her mom as well. That part is a blur. Lol! More often than not when I visited with them, it was mainly to visit with my niece. She has a charming little brother now - another story altogether. So, anyway, we were all there chit-chatting away. Kiki then started asking for Elmo. We shifted a bit in the couches, but, he didn't turn up. She looked around some more, then spotted a piece of him - maybe it was his arm or something - "protruding, as it were" (a line from Monk) - from under my thigh. Apparently, I had been sitting on her BFF all this time. Flabbergasted, I quickly eased myself off Elmo and handed him to her.

Well, I was hardly prepared for what came next.

Even as I type this, I'm laughing! Of course, by this time, I spotted the little smile around her mouth as we cracked up. This happened during that period when we always had to reassure her, whenever we laughed at her funny stuff, that we were laughing with her, not at her. But, on this occasion, she knew she had said something funny. I pulled her to me, "Come here, Missy! You know Elmo can't bleed!" Her mom and I told her she had made a really funny joke and we were definitely going to share it. And we did!

Hope it made you chuckle. I'm still cracking up! 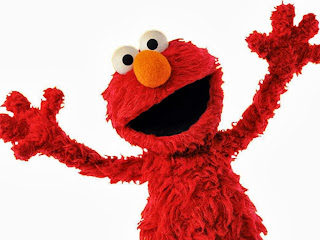